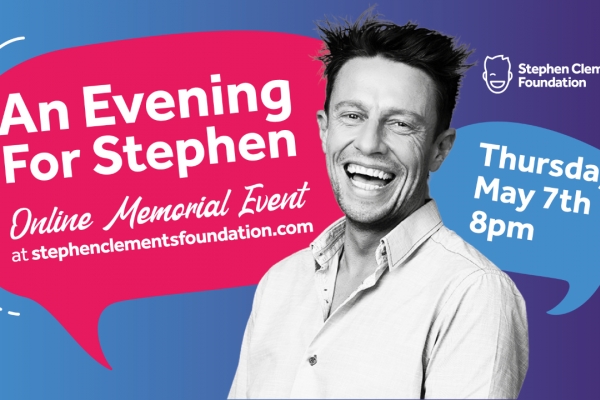 Fans of the late broadcaster, along with family members, friends and former colleagues are all invited to take a trip down memory lane to remember and celebrate the life of a truly unique radio presenter, the one and only Stephen Clements.

Speaking about the online memorial event, brother of Stephen Clements, Gavin Clements explains, “Stephen was simply a creative genius. He touched the hearts of many across the province with his humour and kindness, and we are so proud to bring fans the online tribute show. In every walk of life, Stephen made a huge impact on others through his charity work, radio show, hosting and social media activity. We want to give back a little and give fans the chance to remember Stephen and enjoy his best work. Stephen loved his radio audience, he knew them, he grew them, he cherished them and he gave them something - hope and laughter. His voice, laugh and smile were infectious both on and off the airwaves - he touched the hearts of many through his wicked sense of humour, creative flair and his ability to turn any topic into mischievous fun. You can expect a lot of this in the show.”

An Evening For Stephen will feature audio clips and video interviews with the people who loved Stephen - family members, former co-hosts, colleagues, charity representatives, local sportspeople and broadcasters. The show will highlight a variety of Stephen’s best work including his ‘Stan parody’ with Jamie Dornan, Through The Window, Robin Cabs and other hilarious clips from his radio shows. There will be an opportunity to donate to the foundation online, listen to the entire Through The Window audio collection and purchase official Stephen Clements merchandise. 100% of all donations raised will be distributed among local NI charities in Stephen's honour.

Fans are strongly encouraged to log onto the website between 7.30pm and 8pm to secure their place as the foundation predicts the virtual tribute show will be streamed by thousands.

For more updates and information on the foundation, check out our official social media pages on Facebook, Instagram and Twitter. You can join the online conversation using the event hashtag #EveningForStephen